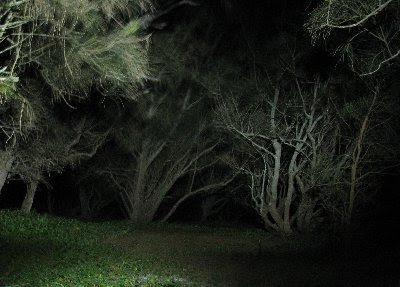 There is a healthy frog fauna in the region around the two lakes with much of the environment protected within the national park. The seasonal activity of the local frog species varies greatly and during the relatively cooler months, such as April when these recordings were made, fewer species can be recorded calling.

It is only the male frogs that call and they call to attract females. Each species has a distinctive call and sound recordings from habitats can be a useful tool in identifying local frog diversity. Having said that, sometimes it can be a little tricky identifying a particular frog species when many are call or there are many species calling together. The sample below is from a series of recordings made around 10pm one night in a low-lying area beside Lake Meroo. With thanks to some of the guys from frogs.org.au it seems as though the most prominent species calling is Pseudophryne dendyi (commonly known as the southern toadlet or Dendy's toadlet) but there may be a couple of other species in the background (drop us a line and let us know). For more information on this species visit the Frogs Australia Network. If you're keen to learn more about frogs, you can sign up to become a member of your local society, in NSW try Frog and Tadpole Study Group (NSW) FATS.

Posted by cameron webb and matt rösner at 8:23 PM