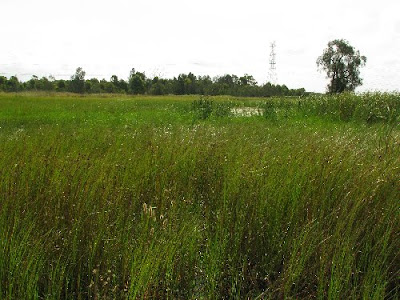 This recording was made at night alongside a freshwater pond on Kooragang Island near Newcastle, NSW. Kooragang Island is a unique location because it was once an extensive estuarine wetland dominated by mangroves and saltmarsh. However, much of the land was reclaimed for agriculture and a network of roads and pathways were constructed across the site. As a result, a series of swales were created that, despite being amongst estuarine environments, retain mostly freshwater habitats. These habitats are highly dependent on seasonal rainfall but they provide locally important breeding habitats for threatened species such as teh Green and Golden Bell Frog. In this recording, you can hear two dominant species, Litoria peronii and Litoria fallax. These two "tree frog" species are relatively common in the local area.

Posted by cameron webb and matt rösner at 2:55 PM