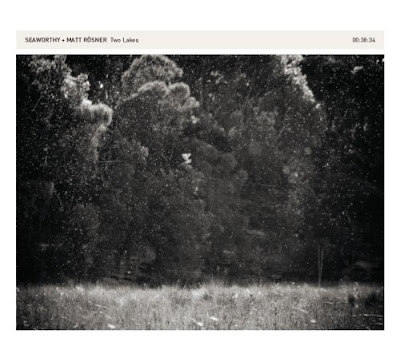 In April 2010 12k recording artist Seaworthy (the recording project of Cameron Webb) and Matt Rösner travelled to the south coast of New South Wales to undertake a detailed field recording study of two coastal lake ecosystems at the Lakes Meroo and Termeil. The aim of the project was to explore the sounds of a fragile coastal Australian environment and to build from those sounds unique musical pieces that provide a place for listener contemplation and relfection.

Field recordings were taken from the lakes and surrounding beaches, forests and streams at different times of the day. Various equipment including a hydrophone, a shotgun and stereo microphones were used to capture the natural sounds of each lake. During breaks in field recoridng, the artists set up recording equipment in a nearby lakeside cabin. Using acoustic and electric guitars, a ukelele and electronics, a series of improvised performances were documented. On the last day of the trip, with the experience of the recording process still fresh in mind, rough arrangements were created from the field recordings and improvisted sets. Matt Rösner then took these arrangements back to his studio in Myalup - a small coastal town on the opposite side of the Australian continent - to mix and finalize the production.

Both Rösner and Webb have been active in the Australian experimental musiac scene for over 10 years with a plethora of releases on local and international labels, sharing a similar vision of molding found sounds and field recordings with traditional instrumentation and electronics. Aside from shared musical interest both artists grew up in close connection with the Australian coastline, albeit on opposite sides of the continent. This connection with their landscape as a remote and diverse place is evident in the pieces created by the artists during their collaboration on the South Coast.

Two Lakes marks the third full-length appearance for Seaworthy on 12k following 2006’s Map In Hand and 2009’s 1897 and blends his signature guitar style with the beautifully arranged field recordings and electronics of Matt Rösner. Two Lakes is a strikingly stark and lonely album undeniably influenced by the remote recording cabin and delicate Australian ecosystem. The blend of instrumentation comes off more like a natural, live duet between artist and nature than a modern-day layered recording. Webb’s finger picked acoustic guitar and ukelele play off of the sounds of wind, reeds and insects in perfect harmony, supported by soft beds of eBowed drones and careful electronic tones. Despite their human presence Rösner and Webb manage to create music that resonates on another level, as if composed by the lakes themselves.