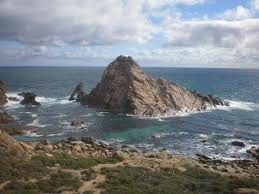 Sugarloaf Rock is situated in the Leeuwin Naturaliste National Park near Margaret River in Western Australia. Since I was a teenager I have enjoyed surfing and hiking near the rock. It is a very rugged part of Western Australia's coastline, the tides and swell can be very unpredicatable. In the past fishermen and surfers have been lost to the Indian Ocean in this area.

This recording was taken on Easter Sunday. With a strong onshore wind and large swell, I sheltered behind rocks and shrubs close to the shoreline. In the recording you can hear the wind and the swell but also the rocks moving. After listening back to the recording was perplexed by the rock sounds and later realised that they probably originated from my feet as I braced against the wind on the uneven shoreline.

Posted by cameron webb and matt rösner at 9:19 PM