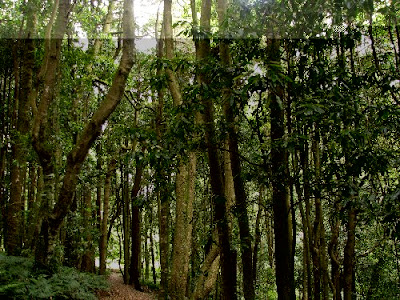 "The Jungle was originally purchased in 1929 by a group of Sydney businessmen to save the magnificent sassafras and coachwood trees from the timber mill while providing Sydney with a national park to its west. It was opened by the then Governor Admiral Sir Dudley DeChair on 23 March 1929 and the original walk was dedicated to the memory of Sir James Fairfax KBE. However, the Jungle never achieved its destiny as a national park as the Great Depression, coupled with pressure for building funds for the Sydney Harbour Bridge, led in 1934 to the land being resumed by the previous owners, the Charley family.
In 2008, 33 hectares of the original Jungle was purchased by the Royal Botanic Gardens and Domain Trust, with the financial support of John and Elizabeth Fairfax and the NSW Government's Environmental Trust. Now part of the Blue Mountains Botanic Garden, Mount Tomah, the Jungle is again in public hands giving Sydneysiders an opportunity to experience and understand Blue Mountains' rainforest."

These recordings were made late in the afternoon on 21 November. While within the rainforest habitats you seem completely isolated, the invasive sound of traffic continues to invade these recordings. However, the diversity of bird calls here more than makes up for it. It would be nice to visit first thing in the morning to make some more recordings.

For more information on the Blue Mountains Botanic Gardens visit their website.